Thoughts on the death penalty 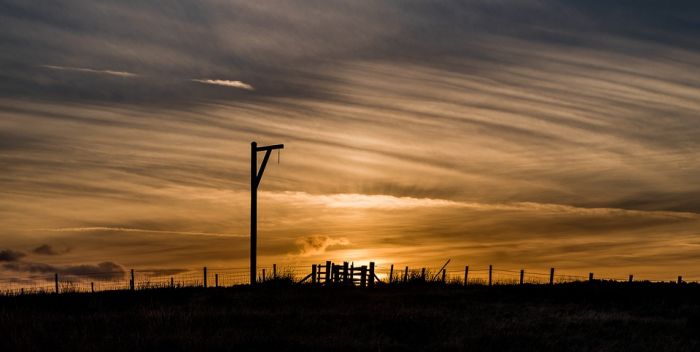 Kelly Renee Gissendaner stood before the executioner for the third time in fact, she was lying. Then, in an inhuman experiment whose outcome no one could predict, she was simply put down like a sick dog. Even the call of the Pope and his legation in the USA could no longer help, even if mercy was asked for.

To expect mercy in the USA when you are on death row is presumptuous. Guilty or not guilty, it's executed. A perfidious parlor game, it seems. Mostly it hits the accused of the black lower class. Those who cannot afford a lawyer, who are provided with a public defender of rights. Hispanos and other immigrants feel the same way.

The poisonous mixtures remind us of Frankenstein's laboratory or other scary movies.

These are human experiments to kill a human being in a particularly cruel way. It serves the gruesome entertainment of the masses. It's like the Wild West. Most of the time, the morning program reports on the nightly executions. What an inhuman punishment to play on the delinquent's fear. Years, with the "icing on the cake" of the three-time performance before the executioners, as in the case of Kelly Renee Gissendaner.

She was executed a few days ago. Until the poison worked, they say she was singing "Amazing Grace."

What a farewell to this world.

The killing of a human being has become an arbitrary game, partly filled with hatred. Influencing cowboys and their understanding of law turns out to be pointless. The rope is hung symbolically on the next tree. If it were up to the prosecutors, for example, guys like smart Chris Koster, the Attorney General of Missouri, then there would be no trial at all, there would be the execution right away. That's the impression you get when you hear him talk. Jay Nixon, as governor loves bread and games, was not willing to comment on the death penalty, which he held so dear.

It is not about the sometimes indescribably cruel deeds of those condemned to death, but about the following, mostly years-long struggle for the lives of the delinquents and for the death penalty as a means of justice worldwide.

The death penalty is no longer up to date, the poison is so scarce that even Ohio is willing to accept executions until January 2017. In the hope of finding the poison. Earlier, after last year's out-of-control execution of McGuire,  Assistant Attorney General Thomas Madden risked the fat lip that "no one has the right to a painless execution."

The world-renowned Texas execution industry never sickens, it's kept alive like an evil fetish. Federal laws do not count, such as the prohibition of cruel and unusual punishment. Texas has also been trying for years to import the required substances, probably from black market trading.

For years, the poison has been in short supply in the USA; European pharmaceutical companies, such as Lundbeck, no longer supply the active substance pentobarbital, which was previously used for comatisation. Now, on dark paths or through alleged "drug mixers" in backyard pharmacies in the USA, they got some poison for the executions. Other active substances are used, such as midazolam or various home-brewed drugs, the effects of which nobody can estimate. If nothing helps at all, then hydromorphins, which are given as opiates in such an overdose that breathing fails.

In any case, the drugs were not designed to protect the delinquents from excruciating pain during the execution. No, it seems as if this is what is wanted, by Chris Koster or his partly hateful colleagues.

It no longer has anything to do with law, justice or punishment. It is state-organized torture and murder. The parties involved are aware this.

After the autopsy of Charles Warner, a convicted child murderer who was executed in January of this year with the wrong drug, it became known why he screamed again and again during the execution: "My body is burning!"

Other delinquents had a "hunger for air" for minutes before death redeemed them. Or not. An incredible example is the Romell Broom case from Ohio, he was executed a little in 2009. One stitch here, one stitch there. Romell Broom was at least offered a cup of coffee and a cigarette after his own prevented execution.

It is hard to imagine that the funds in the Warner case were inadvertently switched. America can fly to the moon, but pharmacists allegedly mix up the labels of chemicals. Rather, it looks as if the torture for the delinquents is to be intensified once again. The list of botched executions is extremely long, just to mention a few examples: Jimmy Lee Gray (34), executed with gas in 1983, even the executioner became nervous when the delinquent repeatedly threw himself against the chair of the gas chamber. Banging his head against the metal.

The list of those who have been burned, charred or simply tortured to death during executions in the USA is too long. Prof. Michael L. Radelet of the University of Colorado wrote a whole list of examples, which began in 1982 with the execution of Frank J. Coppola in Virginia in the electric chair. In the said execution it is said to have smelled of burnt flesh, its legs caught fire.

The short paragraphs to each of the events sound like sheer horror. Unfortunately, the list in its indescribable version is only available in English: Some botched executions in the post Furman period. Professor Radelet gives some examples.

The list ends with Joseph Wood, who spent more than 100 minutes agonizing, after his execution also became an ordeal of indescribable proportions, not only for him but also for the witnesses present.

Oklahoma's merciless governor Mary Fallin even introduced execution by a nitrogen mask after all the bankruptcies, which would probably bring the delinquent from this world to the next with a smile and an accompanying feeling of happiness. In terms of perversion, this could only be surpassed by the IS.

Utah returned to the shooting in the spring, the last time the convicted murderer Ronnie Lee Gardner was assigned, should the toxin not be in stock. Even after his execution, Gardner lived a few minutes on. If the traumatized radio reporter Sheryl Worsley is to be believed, Gardner clenched his fists several times after the salvos and moved. What was a reflex or not could not be clarified afterwards.

In America, it seems to be about how to torture a person particularly cruelly and slowly to death. America's justice system seems to be devising increasingly perfidious methods of execution. The perversion of any legal system knows no ultimate punishment than the death penalty.

IS a master in spreading terror through executions, be it burns. Heads with sharp sabres - actually, for the propaganda, which, like the attack on the World Trade Center by bin Laden, put everything in the limelight with publicity. In Baghdadi's transfigured empire, no one is in a position to resist execution under the rule of law. IS, the definitive axis of evil, does not need the rule of law, only propaganda because faith, the hope of the people, is advanced to maintain a bloody terror regime. There, the execution is carried out in a particularly cruel way, so that several points on the agenda of the Islamic terror regime are fulfilled at once. The torturers of the terror caliph are masters in torturing innocent people.

In no way should the legal system of any country be attacked, no one is entitled to do that; however, to show what the death penalty does. Nothing. Not even deterrence, it is only the public presentation of power over the impotence of a gruesome crime or state arbitrariness. What emerged during the reportage, the research of human perversity, abnormality to kill people, whether by the state or not, is provided with considerable criminal energy. This energy is necessary to be able to commit an atrocious crime. Even in western democracy, the world sheriff USA, very little consideration is given to whether someone is really guilty. In Texas, people press for revenge, no matter how cruel. Justice and the delinquent usually fall by the wayside.

Nor is it intended here to write about the execution of innocent people or people who are intellectually unable to even understand their situation before the executioner. This list, like Professor Radelet's, is endless.

Obviously disabled people are executed, in which the US justice always finds victims.

Last year the German-born Debra Milke managed to escape the executioner: After half a life on death row, her innocence was proven.

However, in other countries the situation is not much better.

Iran hangs young people from cranes that an angry mob has identified as homosexual. Even more pitiful is the stoning of allegedly unfaithful women, which is excused by the Sharia. Iran is execution world champion when it comes to killing government opponents. President Hassan Ruhani does not presume to do so. Even though countless sentences have been obtained by torture. Amnesty falls on deaf ears in Iran.

An inquiry to the North Korean branch in Germany about the death penalty is pointless.

It is like asking the devil himself for an interview to document his actions. Unfortunately, the Beelzebub is silent. For good reason. North Korea's regime has a long tradition of torturing and torturing, of killing and justifying the partly insane

Methods of killing people. In North Korea, murder is the order of the day. The world is watching as the third dictator in a row, Kim Jong-un, expands the concentration camps in his political sectarian state, to judge people there in rows through forced labor and hunger.

Otherwise, the execution is sometimes carried out with an anti-aircraft gun or by a wild pack of dogs to stir up fear in the population.

China, the absolute world champion in executions, is only half-heartedly publishing figures. A clever court clerk developed a bus that travels overland and in which a lethal injection is administered, allegedly leading to death within 30 seconds to 5 minutes. The recipe is secret, as is the statement on the accusations that organs were removed from this bus and that still living delinquents were cremated. (See video).

Previously, the executions were carried out in stadiums, an annoying, vain and self-righteous reporter Ding Yu rushed along with the firing squad to witness voyeuristically the last breaths of a delinquent.

The Imperial Japanese Embassy reacts cautiously to the demand for the death penalty, which is In Japan  executed by hanging with the shortest possible warning. The delinquents are in uncertainty as to when enforcement will also reach them, many fall into madness. This is the intent to punish and torture. Some sat for 30 years or more before the executioner took them.

Widodo's Indonesian government doesn't seem so buttoned down anymore, one seems to be proud of the earth-shattering farewell and the merciless slaughter in the jungle, which even gave the Australian-Indonesian relations after the execution of Andrew Chan and his accomplice Myuran Sukumaran a crack.

Calls to abolish the death penalty are fruitless. The idea of hatred and revenge is still too much anchored in the population.

So, the only thing left to do is to continue reporting and clarification.