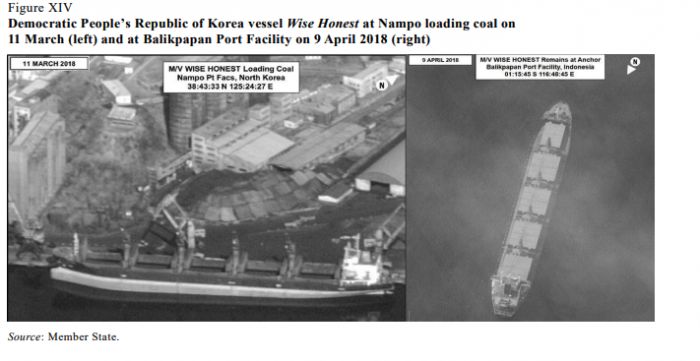 Funny, funny is the life of a dictator

North Korea's news agency KCNA (for Chosun Central News Agency) accuses the USA of the theft of the "Wise Honest", demands in flowery words that the ship is released immediately. Funnily enough, the shabby dictatorship in Pyongyang refers to the agreement between Kim and Trump to build new relations.
At present, the "Wise Honest" is anchored in American Samoa.

Finally, the unnamed spokesman for the State Department in Pyongyang says, "The US should reflect on the consequences of its heinous act."

It is not only since the Indonesian authorities chained the cargo ship "Wise Honest" that one suspects that the North Korean state is circumventing all sanctions.

Kim, a cruel junior dictator in the third generation, is about to join shipping companies and dummy corporations around the world in declaring the sanctions of the international community of states ad absurdum. The USA now enforced the sanctions against the Asian country with all its might and confiscated the "Wise Honest". According to information from the naval portal FleetMon, the freighter was already seized on April 2 in Balikpapan, East Kalimantan, on the Makassar Strait when it was loaded with coal and could not prove the necessary papers to the Indonesian authorities. To the Indonesian security forces, the ship looked more like a pirate dinghy. It's also said they had machine parts on board the vessel which are covered by the embargo regulations.

The crew, 25 North Koreans, also did not have all the papers required for entry into Indonesia or its waters.

North Korea acts quite skilfully in international waters. A gang of smugglers would be green with envy. Kim changes the flag and names of the ships every few months by the state dummy and cover companies.

Besides, ships tranship in international waters. States like Belize and Tanzania, Sierra Leone, flag North Korean ships. The "Wise Honest" was sailing under the flag of Sierra Leone this time. Practically speaking, the captain also had the North Korean flag "in his drawer". Now he is in prison. There is an investigation by a New York prosecutor for money laundering and other things.

As expected, Trump had failed in the broken off negotiations with Kim in February this year. His designated friend Kim Jong-un had other things on his mind than Donald Trump.

The wretched face of the regime in North Korea

Kim is not a geostrategist, but a man who tries to peddle with pitiful means. The Democratic People's Republic of Korea continues to attempt to violate the embargo by using a sophisticated transport system to transfer small arms and light weapons, military equipment such as that used by the Houthi rebels in Yemen, as well as Libya and Sudan, to third countries via foreign intermediaries, including the Syrian arms dealer Hussein al-Ali in the case of the Houthi rebels.
(Continue in Part 2)