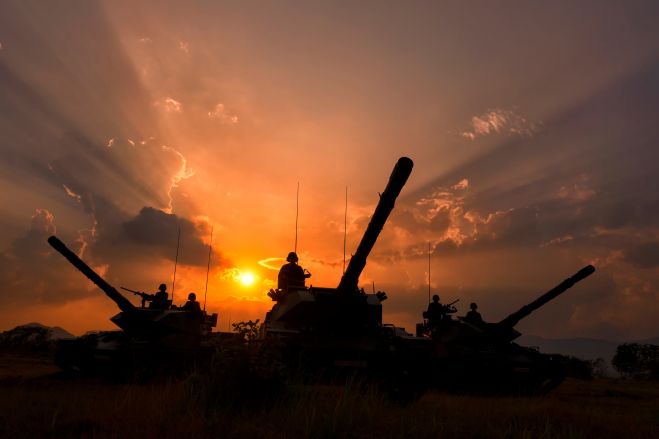 World War 3 begins in the mind of each individual!

Slowly, the situation around the Russian troops on the Ukrainian border is coming to a dramatic head. The USA has won the date for the attack through information from the CIA: next Wednesday there will be rocket fire and the armada that has been deployed there will make its way to Kiev.

One can believe it.

But the war is also being waged in the minds. This is what the seemingly impotent superpowers, which are only a shadow of what they once were, are counting on.

This makes every normal person in the possible war zone wonder, who are the nations actually being ruled by?

The Third World War is not a children's playground with the rockers in the sandbox, but probably the end of civilization.

This emotion is being played with brutally.

In the Cold War, we had the so-called "Red Telephone". Today, people negotiate through third parties and the media.

If you take a look at the overflowing agency reports, you are glad that the old ticker is gone, otherwise many editors would be close to madness.

Too much information about a war that found its origin in political mistakes of past decades.

Norway is in deep concern.

The EU is evacuating its staff from Kiev.

Putin and Biden are to talk on the phone today. At the request of the United States.

The USA evacuates its embassy. Antoli Antonov, the Russian Federation's ambassador to the US, dismisses the invasion dates that the CIA is supposed to have found out as propaganda.

The CIA had also not found out that the Taliban took Kabul in a coup d'état. That was a few months ago. One remembers. But now one can look at the clock and wait for the shelling, rather the missiles and bombers of the Russians.

It sounds like the revelations of the Langley Oracle.

Yes, then one could also prepare and give the invaders a "really hot welcome". Why this fails to happen with the massive troop deployments of the USA, e.g. to Poland, to give Putin a "bloody nose", remains an open question.

One has to ask oneself, what does Putin gain from a war?

Well, perhaps the autocrat in the Kremlin is ill. He came across as puffed up and cynical.

His government business at the table of his puppet regime lately always seemed like the meeting of the mafia bosses in Chicago in the 1930s. That's right, only the tables shone more than the silly grins of his lackey-like lickspittles.

Perhaps the resistance of the Russian people has now reached a point that will only allow it to unleash another" war".

Apart from that, Germany becomes one of the main combat zones in such a scenario.

Think of Ramstein, Spangdahlem and other US supply facilities in Germany. The Russians will not be asked twice to cut off supplies to the front, if that is how it is to be. The German government seems to have gone into hiding and for some unknown reason does not know how to help itself.

If there were a politician who could bang his fist on the table for once.

For this threat of war, it is quiet. Too quiet.

That is why the war begins in the mind.