Who has an interest in sabotaging the Nordstream 1 and 2 pipelines? 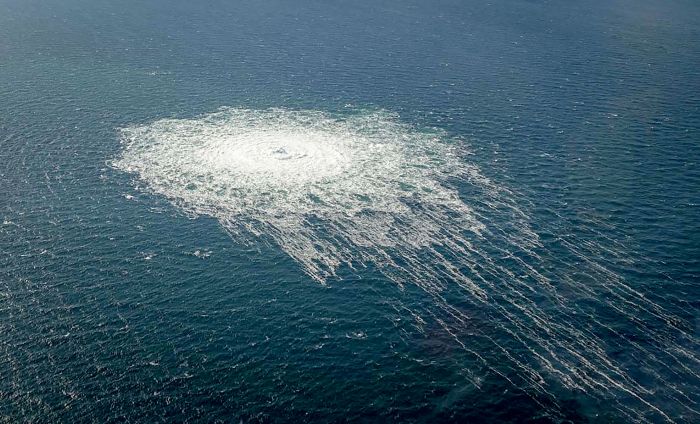 This image released by the Danish Defence Command on 27 September 2022 shows the gas leak on the Nord Stream 2 gas pipeline as seen from the Danish Defence Ministry's F-16 defence system off the Danish Baltic Sea island of Bornholm, south of Dueodde. Scandinavian authorities said on 27 September 2022 that unexplained leaks had occurred on the two Nord Stream gas pipelines connecting Russia and Europe, suggesting sabotage was suspected. The pipelines have been at the centre of geopolitical tensions in recent months as Russia has cut off gas supplies to Europe in suspected retaliation for Western sanctions following its invasion of Ukraine. Photo: Handout / DANISH DEFENCE / AFP)
Rate this item
(2 votes)

Now the Nordstream pipelines are badly damaged and there is talk of sabotage, on all sides.
Of course, Russia has a fundamental interest in sabotaging the West in any way it can. But why the last functioning pipeline?
Can Moscow see in it an opportunity to create even more discord among the population than through the propaganda of an evil campaign?
Or does Moscow intend to distract?
From what?
The bomb with which the actors in the Kremlin are constantly threatening.
Almost daily, the Kremlin regime's claqueurs threatened with the nuclear bomb. At present, sham referendums are being held to annex the territories covered by the war of aggression to the Kremlin regime. Referenda for the artificial veneer of a forced annexation à la Hitler.
But there are other suspects who are likely to profit from the situation if Germany no longer receives gas. Meanwhile, the line itself has been destroyed at the height of Sweden and Denmark, at Bornholm. Even Ria Novosti wrote that people in Moscow are worried. The Americans, foremost because they could sell the gas from their own stock to Germany. Nordstream had been a thorn in the Americans' side for years.
Furthermore, the US has the technology to commit such an act—and the divers. The American side can only be happy about the sabotage because it now has one less problem in the Baltic Sea. Even the Kremlin expressed concern, but what does that mean when the boss in the Kremlin sees war crimes as the daily norm? However, the Wagner group is also suspected of being capable of causing such an explosion with the infrastructure of the Russian navy. There are said to be leaks of 190 metres to 1 km, which were photographically documented in the two strings of Nordstream 1 and 2 by Danish fighter pilots.
They had probably been able to observe bubbles rising from the air. It is also quite conceivable that Vladimir Putin asked his “political bosom friend” Alexander Lukashenko in Belarus to deploy Belarusian forces.
The Belarusian dictator is not above doing damage and leaving no trace. He knows his fate is too closely linked to that of Vladimir Putin. But: Ukraine is behaving like an angry child in many ways, and there are certainly forces there that want to do everything in their power to prevent Europe from continuing to get gas from Russia.
Remember that the Ukrainian navy was able to inflict considerable damage on opposing Russian ships in Crimea, and would certainly be capable of such an act of sabotage. Of course, it is also hardly possible that this considerable destruction to the pipelines could have been carried out without the use of naval divers and submarines.
Moreover, conceivable is revenge for the blocking of Nordstream 1 and 2 or the further escalation in the Baltic Sea. The Swedish Navy's press release clearly states that it was not an earthquake, but explosions, indicating 2.2 on magnitude. It is inconceivable that the Polish or German navy caused this damage. How the pipelines at that depth can be repaired at all is unknown.
It does not help to speculate, but the act is somewhat reminiscent of the raid on the Gleiwitz station that started the Second World War.
Last modified onWednesday, 28 September 2022 10:52
Tweet

More in this category: « Thoughts on the death penalty