They are back - Team World Business Registration 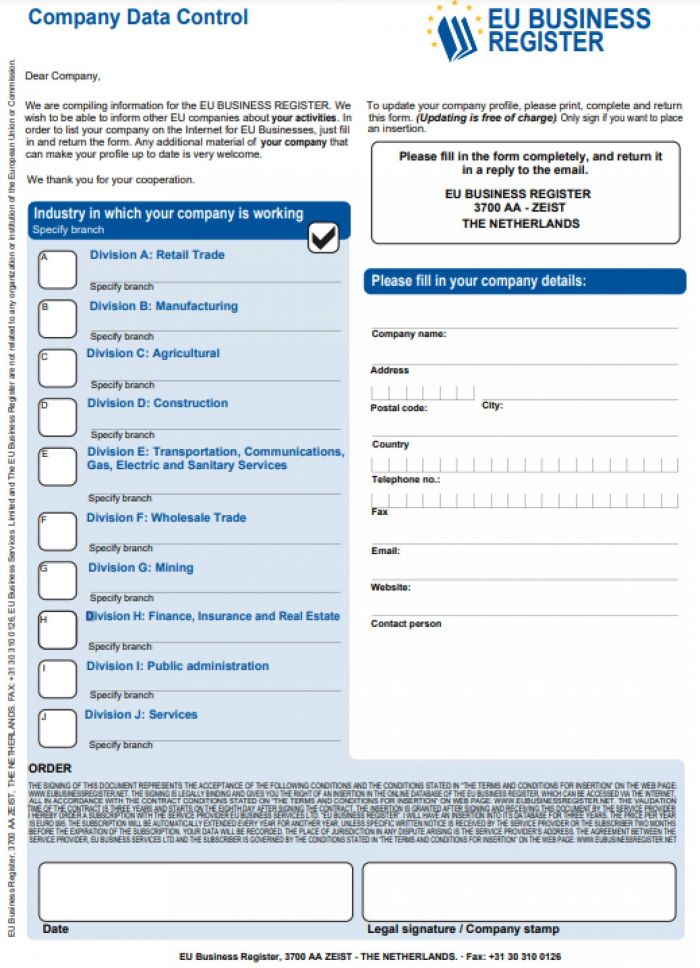 We dealt with the financial wizardry of the World Business Registration complex once before.

A whole network of domains, not companies(!), is now again sending out the semi-official looking forms to advertise worthless business lists that nobody is interested in any way. It is apparently an international network of bogus companies that are using ready-made forms to dupe companies.

This has been going on for years.

In addition, there are numerous indications that the initiators are involved in other scams. The entry in the register allegedly costs 995 euros per year and in the small large print there is a note that the subscription for the meaningless entry has to be paid for three years in advance, otherwise Waldberg & Hirsch Global Collections Ltd, another subsidiary of the internationally operating list-suckers, will come.

Mhr K van Ruler, probably a clumsy identity thief of a well-known professor in the Netherlands, or a beautiful Helena from wherever, is rapidly dunning the money. Here it is an office in Madrid.

Also, other links lead into circles of scammers and other rip-off artists.

Here, neither Waldberg & Hirsch Global Collections Ltd. nor the actual company is shy away from threatening the alleged debtors with physical and psychological violence.  Based on false claims, the alleged debtors then receive bad credit reports in the UK, the Netherlands, the Nevis - West Indies and Romania, where the subsidiaries of the aforementioned are located. A company is said to have been founded in Romania in 2005 with the same claim.

For years, the theatre has been dealing with an obscure company defined by a post office box in the beautiful Netherlands. In the otherwise beautiful Zeist.

In semi-official-looking letters, entry in the Business Register is requested.

A register without substance.

Who is behind it is not clear.

Unfortunately, there is no address, or even a basic data protection regulation, on the worthless page of entries. The authorities seem to have rather forgotten that such an international network reeks of mafia structures.

The domain was bought via a US-hoster in 2012. A trade register extract from the English archives leads to Slovakia.

However, the company has been wound up. It is not clear whether the name is identical or whether the company behind it has a stake in World Business Registration. Also, the senders lead to false domains, like this one. An advertising site for leisure activities in the Asian region.

The trail of money led to Spain

Unicaja Banco S.A. was not the house bank of the company World Business List, but of a SEO Marketing SL. Its managing director Cornelis Boot worked on the orders from a flat in Malaga. According to the junta in Malaga, this person was connected to a lawyer GARCIA FAJARDO PALACIOS RAFAEL. The junta and the court responsible for this gave the information that both had been directors since 2015

Since 2015, the letters of the World Business List and EU Business Services Ltd. are identical and the trail leads to Utrecht in the Netherlands. The company then moved to Banco Popular Espanol S.A.after which the agency traded as WBM at a bank in Sofia in Bulgaria. Piraeus Bank Bulgaria AD.

In this context, the scam of Waldberg & Hirsch Global Collections Ltd. debt collectors, who apparently have the money sent to an account of Caixabank.S.A, also stands out. Targobank and a bank in Gibraltar, a stone's throw from Malaga, are also among the banks that have come to light recently. Also UNICREDIT BULBANK, Sofia, Bulgaria.

Apparently, however, the business that is conducted in this context is no longer so united. The trick with the forms is said to bring in only 2,000,000 euros a year.

It also gives the impression that the business registers use the addresses and industries for further crimes against the victims.

The attentive observer will not fail to notice that Global Collectors is apparently a dummy company. They are not known in the Herengracht.

In later years, another address appears, not as dignified, but still, at Hoogoorddreef 9,1101 Amsterdam. In the so-called Africa Tower, offices can be registered for a few hours. The Global Collectors are said to have been on the market for over thirty years. The trail leads to Düsseldorf these days, to Graf Adolf Strasse, in 1985. We were unable to find an excerpt from the commercial register despite the most careful research.

If you receive such a notice, you should destroy it. Don't fill it out, don't reply, simply delete it. However, if one is being pressured by the operators or by the debt collectors, one should immediately contact the nearest competent police station.

More in this category: « Wirecard - the biggest German bank scandal since Herstatt Bank, 1974