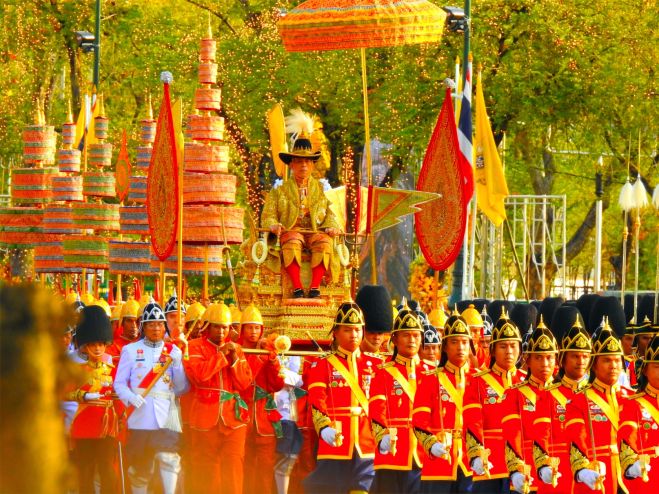 Rama X. is already packing his bags again, while his people go out onto the streets the next day. The eccentric monarch leaves again on October, 20. On this day he wants to return to Germany. Enjoying the Bavarian country air. The protest movement is crushed by a massive police presence.

More sex games with his current concubines await the blue-blooded playboy in the Alpine panorama.

Meanwhile, a huge police force is formulating its brutal slaying against the protest movement.

Here are some scenes from the reality of Bangkok today:

Showing our support to our ally!!! Stay strong and safe. God bless https://t.co/hOrmiel0Ri

While the Thai people are starving and suffering, His Serene Highness is occupied with the different kinds of  his playmates. Every protest is considered an insult by the obvious psychopath Rama X.. This insult is punished with15 years in prison. Yesterday, demonstrators tried to storm the car of the shaking monarch.

One wonders whether these brutal operations in Germany were planned in the pseudo-asylum of the royal torturer. If so, Rama X would be intolerable for Bavaria, for the Federal Republic of Germany, which he and his countless playmates are anyway.

The unloved monarch should stay in Bangkok

In Thailand, the protests are raging. Rama X, the rich but ruthless monarch sees only his advantage and runs away from the protests. Where to? He flies back to Bavaria.

But now it was time to settle the business in Thailand as well, the whole family was flown to Thailand without further ado while nobody else could travel. Among them, as reported at the gala, is his 15-year-old son, Dipangkorn Rasmijoti, 15, with a jet of the Thai Air Force.

The sexual escapades of the blue blood who puts his concubines in prison and otherwise interprets any criticism of his pompous behaviour as an insult to majesty are enough. Apparently, the king conducts his inhuman politics from German soil. The ambassador of Thailand has been summoned to the Foreign Office several times in this context.

Meanwhile, the torture monarch is also damaging Bavaria's reputation in the world, nothing more of understanding for the "Thai-Kini" living in filthy luxury. It is time to ask Rama X, who is apparently far removed from reality, to leave Germany.

Rama X, the Thai monarch, gradually becomes a nuisance in the Federal Republic of Germany. While everyone kept to the initial restrictions imposed by the government, the monarch flew back and forth. Once to fly to Thailand for festivities. Then again, he headed for various airports in the Federal Republic and practised the pilot manoeuvre of touch and go with his passenger plane to satisfy his urge to renew his flying licence instead of going for a walk in semi-domestic Bavaria. As if that wasn't enough, the comical king, who had a Boeing converted into a flying luxury palace for himself, obtained a special permit from the city of Garmisch-Partenkirchen when the exit restrictions were imposed. This allowed him to stay at the Hotel Sonnenbichl, despite having his residence in Bavaria. Why, was not clear even to the Court rapporteurs, who reported on the increasing number of absences of His Majesty.

Not only since yesterday has the bustling monarch from Bangkok become a filou. We recall that his Boeing was once chained to a pledge seal at Erding airport with unpaid debts, until His Serene Highness loosened more than 30 million euros. Maha Vajiralongkorn was still a prince at that time and had been living in a villa in Tutzing on Lake Starnberg for years.

He recently took the parade of his faithful at Munich's Erding airport with a barely belly-free top. Rumour has it that he had conveniently got rid of his tired girlfriend from the private sphere by simply having her arrested and giving her a whimsical story about an acid attack as justification. Before that, the man, now crowned king in gold panties, had dumped his three wives.

But the Free State of Bavaria has experience with blue-blooded troublemakers, as can be guessed from the story of Ludwig II.
Now, however, the comical king, who resides in Bavaria with his court, i.e. courtiers, lackeys and concubines, and who until now could only be described as a little odd, is mutating into a skilled torturer in diplomatic status.  This, however, only behind closed doors because the blue-blooded man mercilessly persecutes anyone who has anything to criticize about him and his white royal uniform jacket.

As one could gather from numerous well-informed circles, the strange king had numerous persons from his entourage flogged on the territory of the Federal Republic of Germany. This is said to have happened on the fourth floor of the picturesquely situated Hotel Sonnenbichl. Torture is forbidden even for kings in Bavaria! What sounds like a horror fairytale became reality during the Corona crisis in Germany. The brutal monarch with a penchant for eccentricity in protected status is to watch the films of courtly punishment for his own pleasure later on. But that is not all. According to a report by the British journalist Andrew Gregor Mc Marshall, the aristocrat who has fallen out of his role maintains a kind of torture prison in Thailand, where he has unpleasant characters tortured for a long time and then has the films shown in a kind of "best of" when he lives in his villa on his native Starnberg Lake.

All the circumstances of the monarch now call numerous human rights activists to the scene because Rama drives his royal fantasies of omnipotence too far. It seems that Rama maintains the Thai torture prison because of his palace in Bangkok, as new investigations now reveal.  Here the belly-free monarch is said to take particular pleasure in the suffering of arbitrarily imprisoned prisoners who are forced to drink urine, suffer from sleep deprivation and eat worms. While Rama appreciates the hearty Bavarian cuisine, there are countless prisoners who are literally gnawing at the hunger cloth.

Rama X. is certainly not as easy to stroke as Rama's name, and in recent years there have been increasing reports of royalty's failures in apparent exile. Rama is not squeamish with critics of his decadent courtly excesses. The man with the name Maha Vajiralongkorn, unpronounceable to Europeans, followed his father Bhumibol, who was very popular with the Thais, on the throne in a kind of fantasy costume garnished by a crown on his head. It is otherwise known about the bon vivant at the gates of Munich that he married his former bodyguard some time ago. Your Majesty will be merciless, as his master of ceremonies recently threatened in the social media if criticism of the ruler is made. A journalist was arrested when the monarch returned to Zurich from a trip to his old homeland.