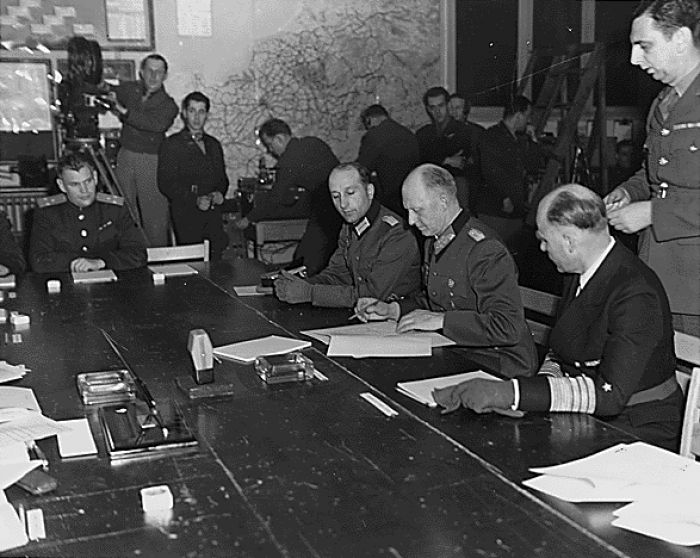 Colonel General Alfred Jodl, previously authorised to do so by Karl Dönitz, signed the unconditional surrender of the Wehrmacht to the Western Allies in Reims on 7 May 1945, which came into force on 8 May. Franklin D. Roosevelt Library (https://www.archives.gov)
Rate this item
(0 votes)

When the international community had stormed Nazi Germany, the extent of the crimes of the Hitler clique gradually became apparent. A German Reich no longer existed, at best in ruins where corpses were piled up. No matter by whom. In death, everyone was equal. In historiography, the little man was forgotten, and entire libraries were filled with Hitler's end. The same goes for Goebbels and the rest of the confused despot's ugly entourage.

Many say it must be good to remember that. No, I can't do that. One cannot remember often enough the atrocities of the Nazis after the surrender.

Notably, in times when right-wing extremist forces are using the same words as Goebbels or Hitler to cultivate hatred in Germany again.

What he left behind, also for the Germans, 75 years ago, is symbolic of what is also in store for the intellectual co-step walkers of the year 2020—suffering, grief, expulsion, injustice and death.

At that time, millions of people were affected daily by death, destruction and homelessness. People who did not fit into the world view of Adolf Hitler and his Nazi sect. This would be repeated. Inevitably.

Because nothing has changed in the idea of Nazism.

We also have the pictures of those who wandered the streets of Germany, the prisoners of war, the forced labourers, the former concentration camp prisoners, the mothers with their children, Hitler's Youth children, who Hitler sent to war out of cowardice in the face of his fate. It was the end of national perversions, unfortunately not the end of nationalist ideas.

When one sees these pictures, one considers the fate of those who were the real losers of Hitler's idea.

The pictures are from the fund of the

loading...
More in this category: « Buchenwald 25 years after Srebrenica - the victims are unforgotten »