Tristan Bruebach - more than 20 years after at the crime scene 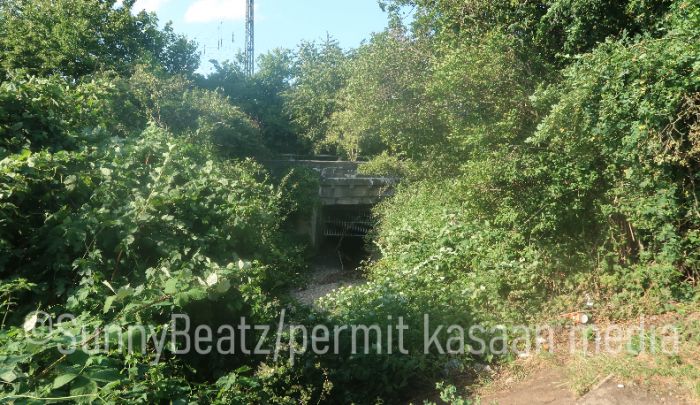 Tristan Bruebach - more than 20 years after at the crime scene (June 27, 2020)
A miserable but never forgotten crime
Our guest author Sunny Beatz follows the traces of the last hours of Tristan Bruebach. Every reader can imagine the perpetrator's atrocities very clearly in this sequence.

We pay the author great respect.

The crime must never be forgotten. Here you can read the story of Tristan Bruebach.

In the afternoon, shortly after four o'clock, I started my journey from Frankfurt / Main - equipped with a city map and my camera - in the direction of Hoechst, to get a personal impression of the scene of the crime and its surroundings in the murder case "Tristan Bruebach".

After a short orientation phase in the entrance area of the station, I first decided to visit the Bruno-Asch-Anlage, which was located in the eastern direction of my position. According to the female witness, the last time Tristan was seen alive here was at 3:20 pm sitting on a park bench. 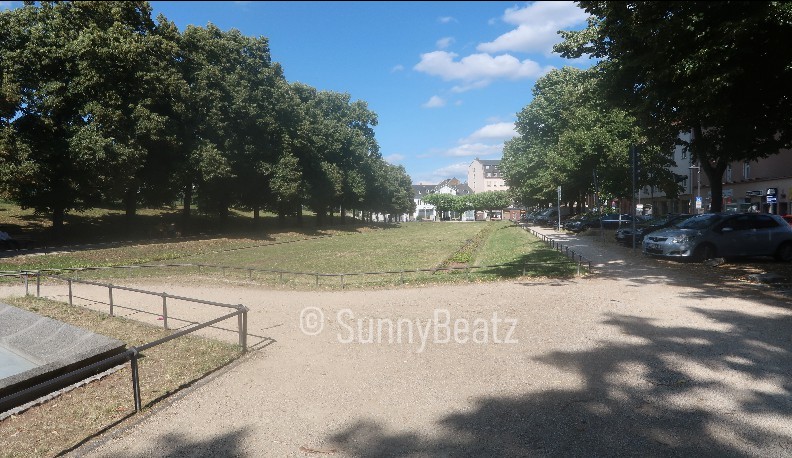 According to the information board, the plant was "overhauled" towards the end of autumn 2019.

So I had to assume that today's appearance is not the same as in 1998. However, a passer-by told me on my inquiry that "not much has changed here. The benches were renewed."

I first walked the path on the right to the end of the layout. 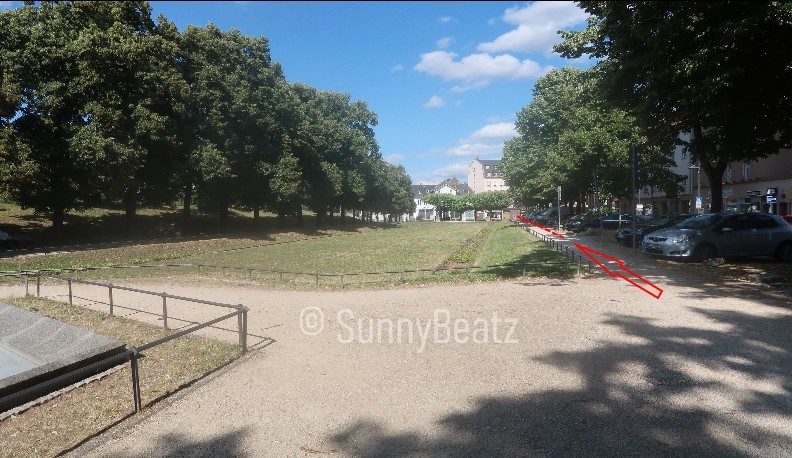 
There is also an information board, as well as a smaller, paved square with a conspicuously large number of male alcohol drinkers.

When I observed these people, I immediately remembered the description of the above witness, who said that she saw "two foreign-looking, male persons" sitting on the bench with Tristan.

This description could have been a good 90% of the people present at the station and its surroundings on that day.

After his stay at the station, Tristan is said to have set off in a westerly direction to the Unterliederbach tunnel.

At the end of the layout, I went to the opposite side of the tunnel and went back towards the station. 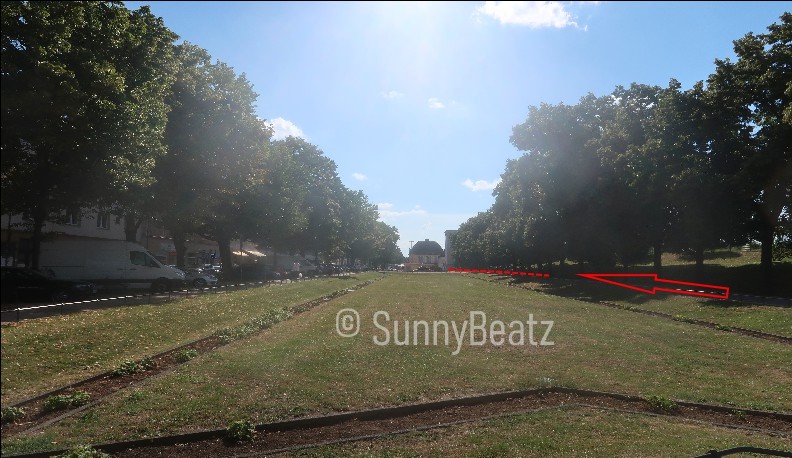 The measured time to pass through the installation (directly, at average speed, measured about 3 minutes).

Tristan is said to have walked between 15:20 and 15:30 from the Bruno-Asch-Anlage to the south entrance of the tunnel. There he finally died.

For this walking distance, I measured the time of about 5 minutes. Depending on the walking speed, the time was reduced to about 4 ½ minutes.


Back at the station building, it becomes immediately noticeable that the entrance area, as well as the immediate surroundings, are exceptionally well frequented. I met here apparent commuters, pausing construction workers, people who were in the various cafés and conveyance stores and countless young people who were loitering there.

Especially the young people seemed to watch the events at the station very closely.

To get to the southern entrance of the tunnel, I walked past the station building and the bus stop and then turned a little further right onto a smaller path.

I want to point out explicitly that the tunnel is by far not as fluctuating as the station area! It is much more isolated and can only be found today if you know the area. 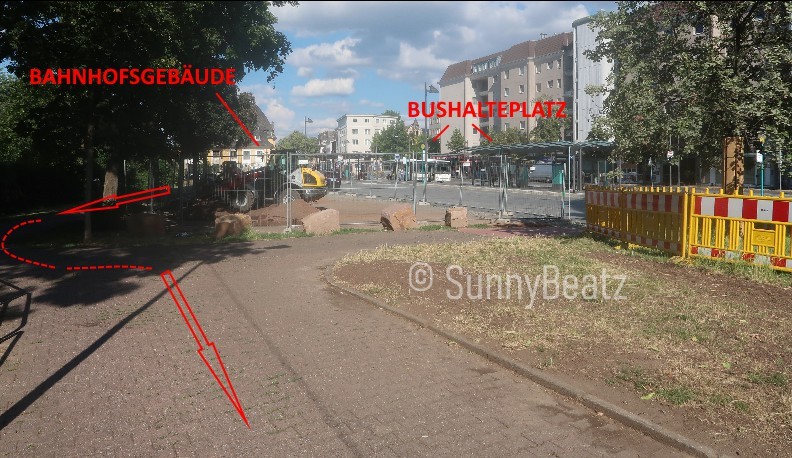 After following the path mentioned above for a few meters, I first came across the trail mentioned above, from which the 12-year-old witness claims to have seen a man with a black cap and a blond, long ponytail crawling up the path shortly after Tristan's murder. 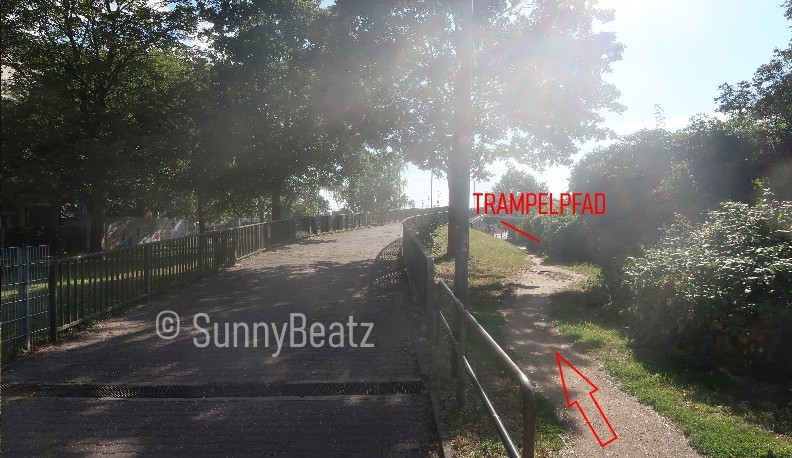 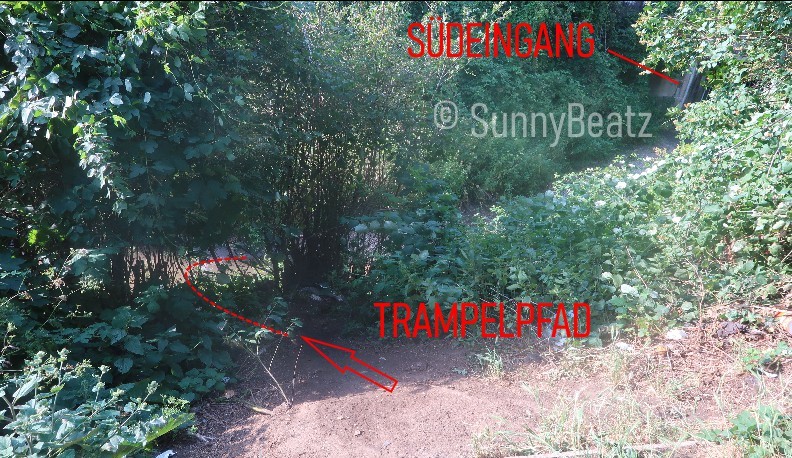 The trail at the south entrance | © SunnyBeatz

Due to the high vegetation in the current season (end of June 2020) it is neither possible to reach the river bed in front of the entrance nor to have a view of the whole southern entrance. 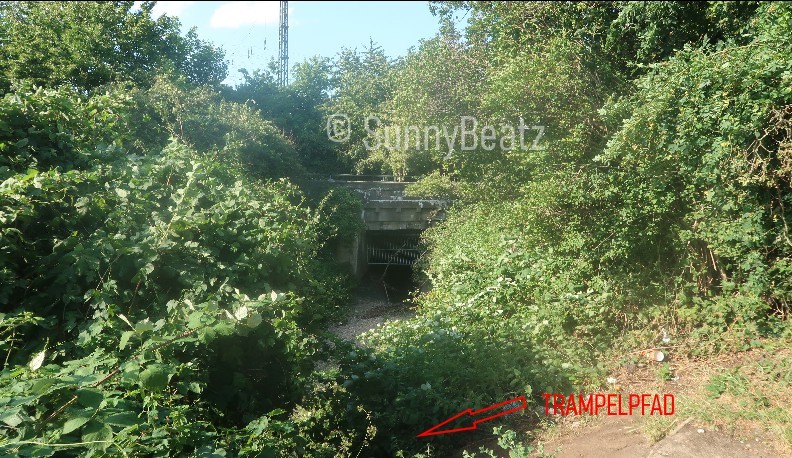 Scene of crime (southern entrance of the Liederbach tunnel) | © SunnyBeatz 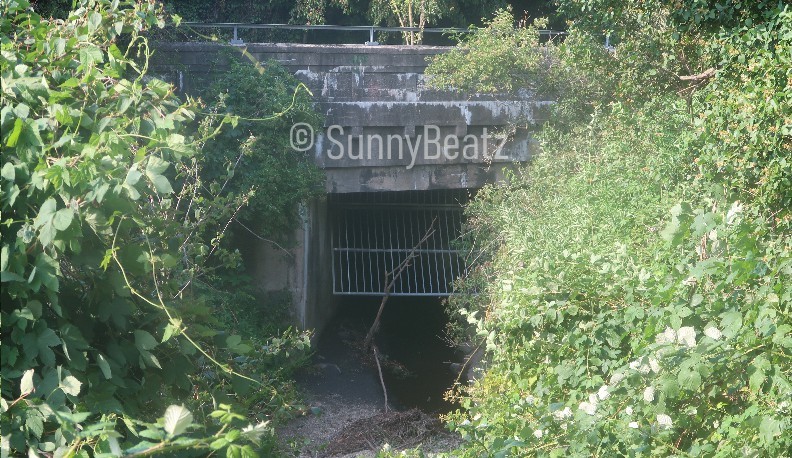 
I then left the trail behind me on the right side and followed the path further on.

Surprisingly, a few steps further on, I found another path towards the river bed before the southern entrance.

Unfortunately, it was not possible to descend there either, as it was an extremely steep slope.

A few meters further on and turning right, I reached a place from where I could take more photos of the river bed in front of the southern entrance. Here I saw for the first time that some parts of the Liederbach were not dry, contrary to my expectations. 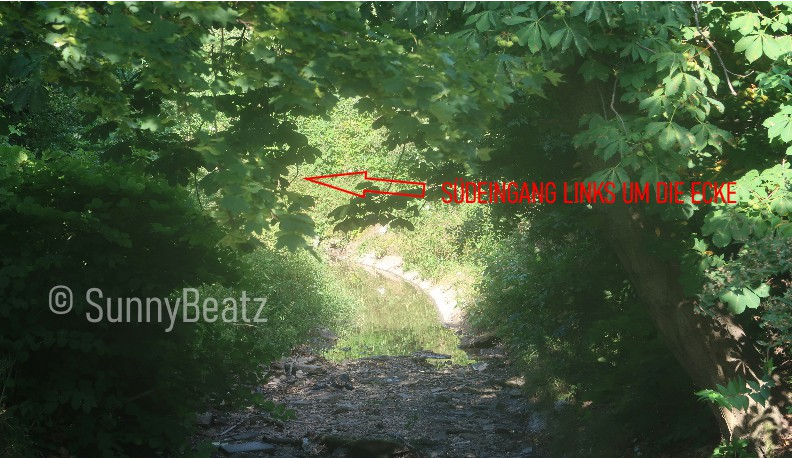 I looked around there for a while and then decided to go back the way I came and visit the north side of the tunnel.

If you go back the same way, you also pass a playground very close to the tunnel.

The playground near the south entrance of the Liederbach tunnel | © SunnyBeatz


To reach the northern entrance of the Liederbach tunnel, I entered the station building for the first time, which had to be crossed. 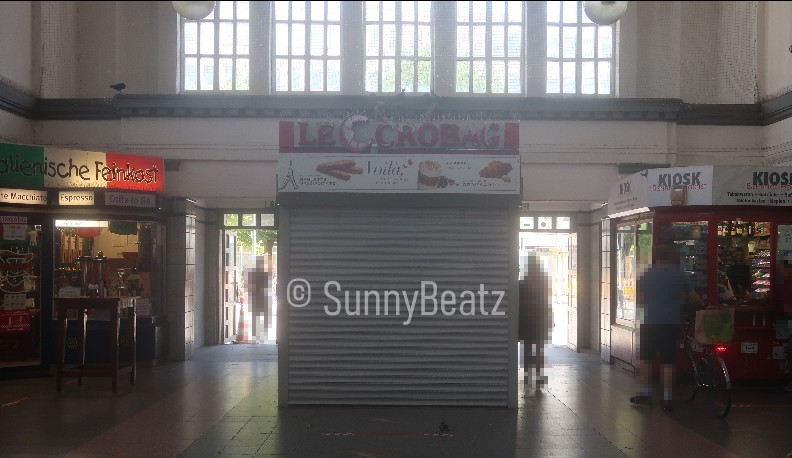 After I entered the entrance area shown above through the right door (seen from the inside), the first thing I noticed was the red convenience store.

After a short comparison with the video recordings of Tristan at the station, it should have been taken from exactly this convenience store.

The wall phones should have been installed in the area next to this kiosk in 1998. Today they are located on the opposite side, next to the travel centre.

I then went through the building towards Adelonstraße, where I turned left at the end. 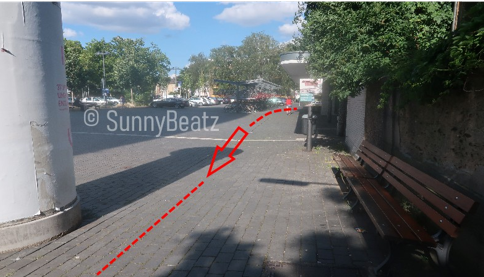 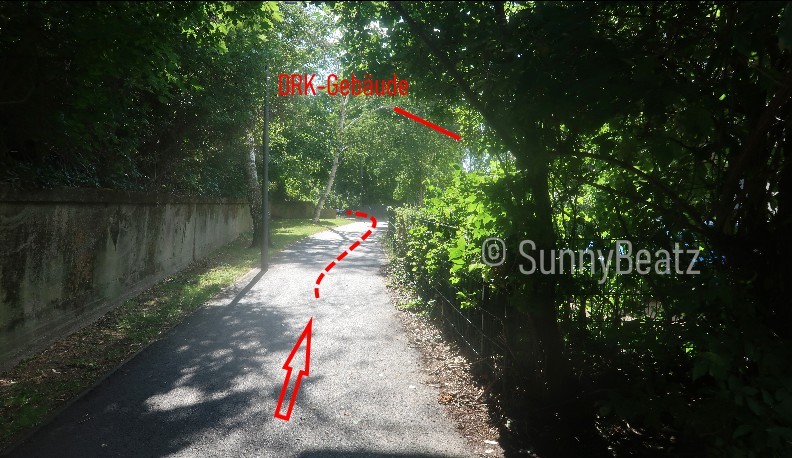 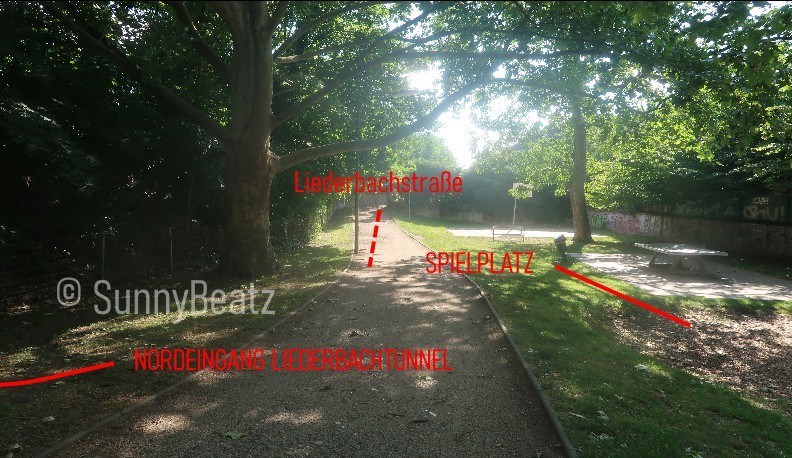 I first looked at the immediate vicinity of the north entrance, where I noticed that there are relatively many places in the vicinity where (possibly) children are staying. On both sides of the tunnel, there is a children's playground less than two minutes' walk away, and the young people mentioned above also seemed to use these places.

After arriving at the north entrance of the tunnel, I noticed - as on the opposite side - that the gate was open.

Nobody seems to be bothered by the fact, as a passer-by later told me that this had probably been the case for quite a while.

"In the past, they used to close it again and again, although today it is sometimes open for weeks. I don't know when they do that either. I often walk by here with the dog. In the morning, at noon and in the evening I go for a walk, and if it was still open in the evening, it was suddenly closed in the morning with my first round. Do they do it overnight? Must be..." 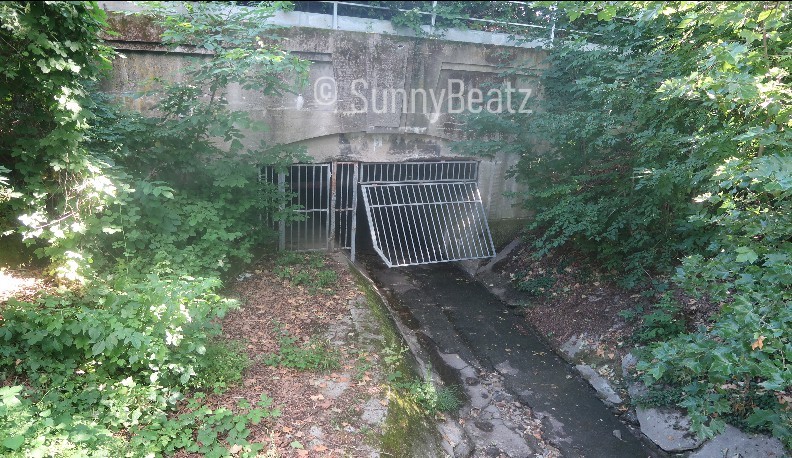 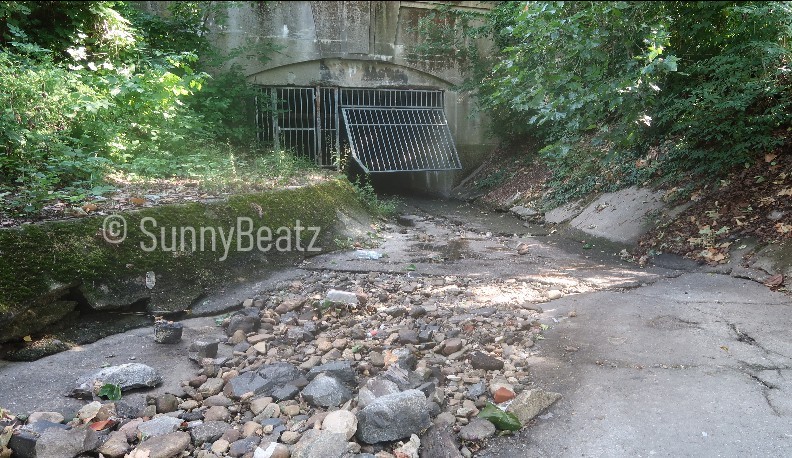 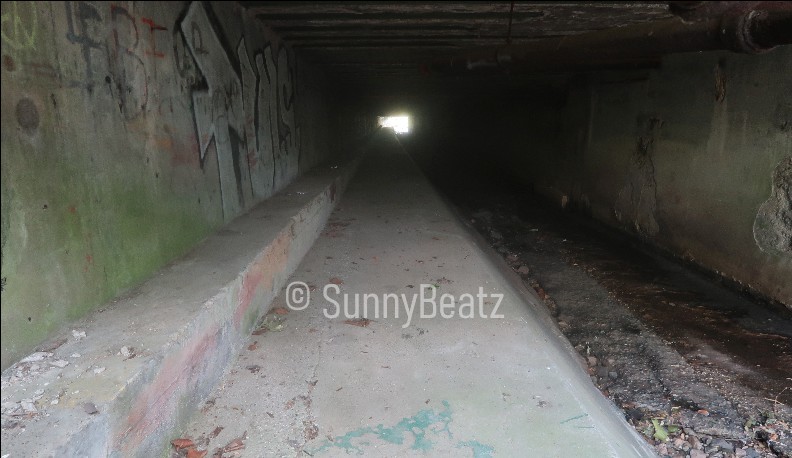 This is where my crime scene inspection ends.

I took some more pictures of the surroundings, talked to a few passers-by on my way back and then drove home - packed with impressions and emotions.

In the following article, I will report about these impressions and my findings.